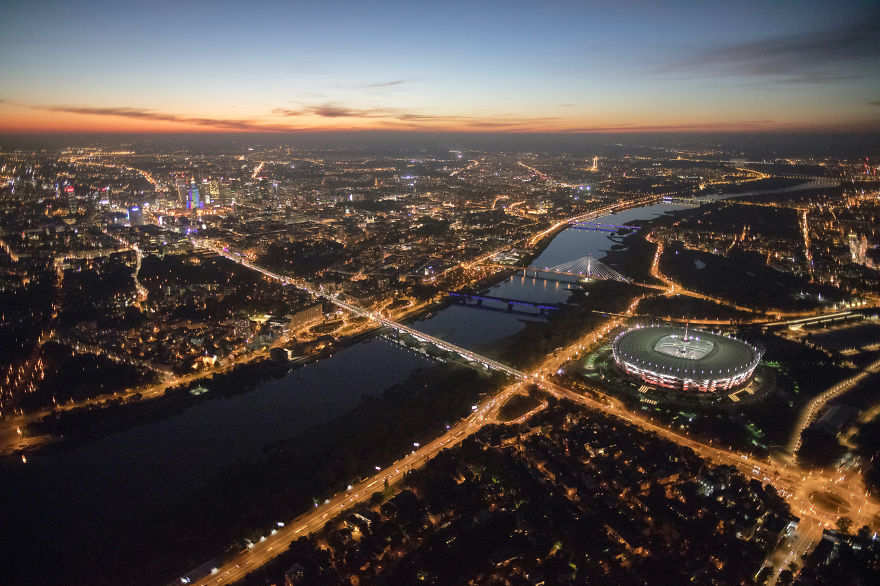 Warsaw on Air – Did you know?

You thought you knew Warsaw? From every corner to every roof or dark basement? I bet you have never seen it this way: This stupendous work was made by Maciej Margas, a young Polish photographer who thought the same as you. Known for his Timelaps of Warsaw video (check it here, it’s super), Maciej made all this possible with the help of another photographer, Aleksandra (check her work here). Their goal is similar as ours: they want to show Warsaw and Poland to the world as it is today, to bypass stereotypes and show that the capital has raised from the War time, raised extremely high.

It took them 7 months to acheive this. They prepared this shooting which was realized on air at day and night from an helicopter ride. However, as you may know, there are flight restrictions over the city center of Warsaw, which explains why there was no pictures of the center published yet. Indeed to fly over, only two engines helicopters are allowed. To afford such ride, a quite important amount of funds are necessary.

With a lot of work and will, the photographers managed to raise a sufficient amount of funds from global and polish sponsors, from crowdfunding as well and to get the highest quality photography equipment from Canon.

After an excited and stressfull tim,e and a short training above Praga district, Maciej was able to fly above the city for 1h30, surrounded by techs and cameras inside and outside to make a 360 degrees video (check it here, it’s amazing!).  He made more than 5000 shots in this short time and he chose 25 of them to expose, on Air again, at the 35th floor of the Warsaw Trade Tower. We had the pleasure to talk with the two photographers, and even if everything is quite recent, they already see themselves flying above other cities of Poland and perhaps of the World. They created an online shop where you can find picture-based products, which are original and elegant. It can be a very good way to show all your families the city you live in ;) Check it up here!

The pictures are surprising the rest of the world as well, they are all over polish media and Maciej’s work will also be used by BBC Four shortly.

I believe images speak for themselves here… so I invite you to hurry up and go visit Warsaw On Air exhibition to see more of them and talk directly to those two impressive persons who devoted themselves to make you open your eyes on our beautiful Warsaw.

From November 21th to December 6th

Opening hours: 8AM to 9PM

Their amazing products on Warsaw Gift Shop: here and at the exhibition!
(Don’t hesitate to write them for language concers, they speak english very well)