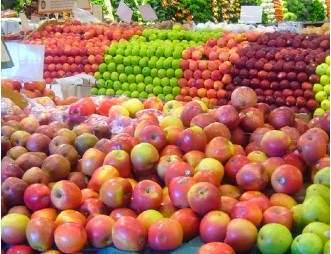 You have definitely seen this poster in our university.However not all of students, unless you are Polish or Ukrainian, know what it means. My post will be about the “Eat Polish Apples” flash mob and its impact on social life in Poland.

Poland – the largest producer of apples in Europe, says information agencies at the Associated Press. According to Russian sources, imports of apples, pears and quince from Poland to Russia last year amounted to 776,000 tons worth over $427 million. Since August 1st, Russia introduced a ban on the supply of almost all fruits and vegetables from Poland . In response, people  decided to eat more of their domestic products. This campaign supported by many journalists, politicians and public figures, athletes, actors. Hashtag #jedzjablka (eat apples) became one of the most popular on Polish Twitter.

(Eat apple and leave the core for Putin)

Kozminski University has joined the flash mob to support the domestic producers.  People who attended the university during those days had an opportunity to eat free apples. From my point of view it was very helpful… for students.

One Response to “Eat Polish Apples”