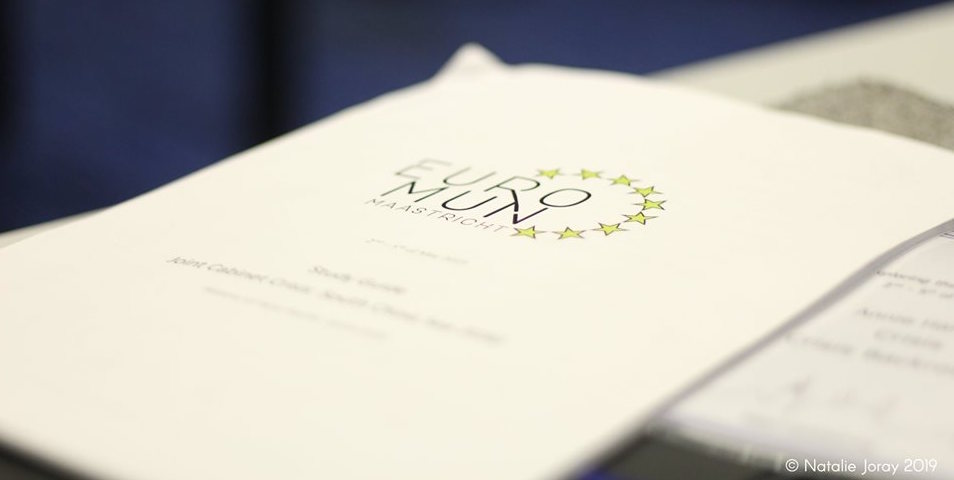 The alarm rang at an ungodly hour and having to roll out of bed at 5 am in the morning really made us question our life choices at that time. Nevertheless, we arrived in Modlin Airport by 6.40 am and proceeded to get some much needed coffee and find a good spot for a picture together. We weren’t all wearing Kozminski gear for nothing after all!

Much to absolutely no one’s surprise there is not a single spot for a proper pic in Modlin, hence we decided to bother the people of Eindhoven for a picture upon our landing in the Netherlands. Fortunately, the photo didn’t quite manage to clearly showcase our sleepy gazes and bags under our eyes after a sleepless flight in the wonderful comforts of Ryanair plane. Nevertheless, we were ready for what was ahead and having gotten the picture out of our way we proceeded promptly to Maastricht where the conference registration was already underway. After welcoming all the delegations, the opening ceremony proceeded with the lecture by dr. Erhard Busek, the former Vice Chancellor of Austria about the changing world in XXI century and the meaning of the European idea. From there we proceeded to our selected committees to start the simulation.

I was placed in an advanced Crisis committee which had to deal with the issue of trade on the South China Sea and the economic integration of south-eastern Asian countries in the Association of Southeast Asian Nations. Over the course of few days the delegates representing Philippines, Indonesia, Malaysia, Singapore, Myanmar, Thailand and Vietnam managed to create a free trade agreement among themselves which in turn evolved into a common market with a single currency we called Pacific Coin. Believe it or not but by the end of day three the ASEAN economy surpassed the Chinese one becoming the fastest growing and biggest economy in the world with the most important currency in all of Asia. I’d say good job us! During the days we were honourable delegates, the evenings however, were spent integrating with people from all over the world representing some of the most prestigious Universities from each continent. The final social event – the Closing Gala was also a great opportunity for us to show off our great KU style and dare I say we brought it? Yes, we did!

The closing ceremony summed up all of the delegates achievements and negotiated agreements and off we went to use all that we have learned in the real world. What an experience it was to actively put to use the skills we’ve been developing during the course of our studies at Kozminski in order to make the (simulated) world a better place. I wish for all of us to once live in that world where atomic energy in put solely to good use, the former colonies found some justice over the former oppressors and the difficult territorial and economic issues in Asia have been resolved. And all that achieved just because Kozminski decided to send its first official delegation to EuroMUN 2019.