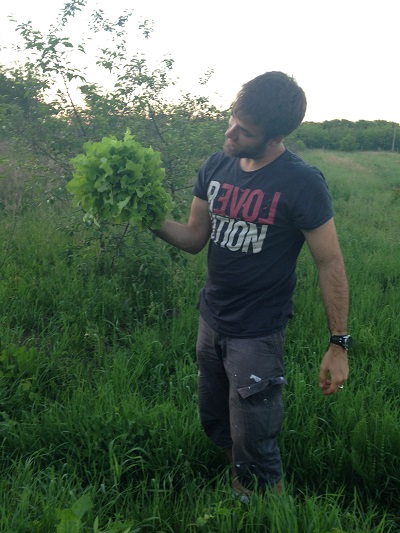 I want to farm.

Why on earth would you want to be a farmer?

That is more often than not the first thing that someone says to me when I tell them about my life’s dream. Followed by “You are crazy”. That’s right I said it. I want to be a farmer!

There is no money is farming! Farmers are poor, simple and uneducated people. The stereotype of some backwoods hillbilly redneck slaving away on the hot sun in his fields, riding his tractor from dawn till dusk. That is what so many people think. I beg to differ. There is no money in modern conventional farming. There is no money in having so many inputs and overhead. A few decades ago we started using linear thinking to solve non-linear problems, farming being one of them.

Modern agriculture was actually born from the war industry. It was found that the same chemicals used to kill soldiers could be modified and used to kill pests. Some of those chemicals even seemed to help plants grow. In order to look pretty, have fruit and grow strong plants need only 3 elements: nitrogen, potassium and phosphorus. Humans on the other hand need well over 50 elements, vitamins, minerals, amino-acids etc.

Many people don’t think about this fact but plants can be altered by hormones the same way that humans can. Think about the body builder that is on steroids. Think about how muscular and tone he looks, the keyword is looks. On the inside he probably has health problems, as there are many side effects associated with steroid use. If I wanted to I could put a hormone on the leaf of a plant that makes it grow roots. Is it natural? No, but it can be useful.

I tend to stay away from man-made chemicals and use chemicals that are provided by nature. Some of nature’s chemicals are equally harmful to us as the ones that we have created in a laboratory. If you take some branches from a willow tree and cut them up into 3 centimeter pieces, you can soak them in water and make a tea. This “tea” can be used as a natural rooting hormone if you want to clone your favorite plant.

My story of wanting to farm is a long and winding road that could actually become its own book. The basic reason is this. The earth needs people who want to be stewards of the planet. I see modern farming as one of the killers of the planet because it fights nature instead of assists nature. If we start to see nature as a teammate instead of something we are playing against we can have a truly sustainable system that creates fertile land instead of extracts fertility from the land.

I came to Poland in 2012 to attend business school at Kozminski. Though they are not an agricultural school they do teach food law. Kozminski is a tool for me that I use to help learn about the laws of farming in Poland. Farming is written into the Polish constitution here and it is very important to the culture. I am proud to be a part of that culture. If you want to learn more about my farming journey please visit PermaculturePoland.com