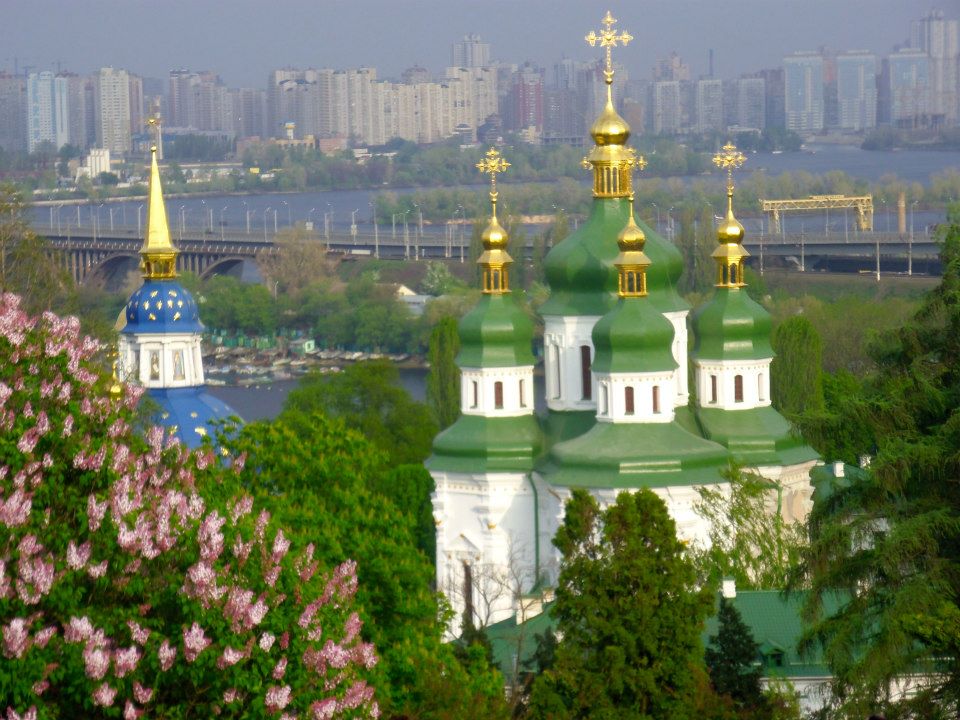 As you may have read on my post about U Siostr, the Ukrainian restaurant I visited in Warsaw, I lived in Ukraine for one year in 2012/2013. I studied at Kyiv National Linguistic University, in the Preparatory Department for Foreign Citizens. I there studied Russian. I had been in Ukraine for the first time when I was 15 years old, so for me learning Russian was a way to communicate with some of my friends, in their language, understand better the culture in Ukraine and actually gain a competitive advantage for the job market.

When I left, I left friends who felt like family. So I decided, while studying at Kozminski, to take the opportunity to be “only” 15 hours away to go and visit. During my stay, I stayed with my so called Ukrainian family, so Maïlys did.

My time in Ukraine was a great experience, and I always speak fondly of it. So when I decided to pay a visit to my friends, I invited Maïlys to come along and she decided to go with me and see for herself. We were also joined by Benja, Antoine and Vanessa. It was for me the opportunity to show them the city and give them a sense of what Ukraine is like. Let me take you on to our journey. I hope you will enjoy the ride and want to visit Kyiv too.

DAY 1 : we reached Kyiv at 11.35am after a 15h bus ride. My friends waited for me and Mailys at the bus station and took us home. We settled and had some home made food. One the menu : blini with tvorog, salad, borch. Then I took Maïlys for a walk in my neighborhood in Pozniaki. I showed her where my friend Alla teaches French, the park, the lake and the market “Universam Pozniaki”. I told her about the city, the region and the situation.

At dinner, we had a typical Ukrainian meal with 5 vodka toast, and with many types of food on the table. We had a very interesting conversation about the life in Ukraine, the war, the situation. For us it was an opportunity to know things from the inside, not from the news. DAY 2 : we met our friend Benja in front of University Taras Shevshenko, one of the most prestigious institutions of the country. Then, it was time for the first picture of the day with Maïlys. We went for lunch, walked around on Maidan. We saw the photo exhibition about the Maidan protest, and the pictures of all of those who did there. It was very strange for me to see it. It really made me have flashbacks of the protests that I saw on TV, and then you realize that yes, France is not so far, and that all those people died for an ideal, and for making their country better.

We then met my friend Serguey, who is on holidays from our school Audencia in France. We went to Sofiiskaia square, and all the way up in the bell tower. It was actually is first time there. And then, we met with Vova, one of Kozminski’s own Ukrainian student, who was in Kyiv too. And well, I actually was the guide, because you don’t always do the touristic sightseeing in your own city. So I took everyone to Andrevski speaks where you can find many souvenir shops, with the touristic price, but again, who else would need a souvenir ? We visited Andreskaia Tserkov, which was design by Ristrelli, who is also the architect of the Winter Palace (the Ermitaj) in Saint Petersburg.

We then went to Paisajna Alleia, a park with a nice view on the Podolsi Raion with different modern statues and funny looking benches. Have a look at the pictures of day 2.

Prices : Marshrutka & bus tickets from 3 to 5 UAH / Metro jeton : 4UAH / Lunch/dinner at a buffet like Puzata Hata, Dva Gusya : from 30 UAH to 70UAH (depends on how much you eat) / Sofiiskaia cathedral & bell tower : around 25UAH with student card DAY 3 : we met in Maidan with Antoine and Vanessa. Below you can see the map of our day. And yes, we walked most of it !

From Maidan, we stopped in Dva Gusia for lunch. It is a buffet with traditional Ukrainian food for very affordable prices, and a large choice (like Puzata Hata). We then walked to the European Square, from where we went to see Druzbi Narodiv and the panorama on the left bank of the city. We then walked through the park and saw the Ukrainian Parliament, the Duma. We had candy cotton in Marinski square, saw the President’s house, walked by Arsenalna and then went to explore the Lavra Pecherka reserve. It was the first monastery in Ukraine. One of the churches is very small and is from the 12th century. You can see golden domes on the churches and we even saw an orthodox mass. Note that caves close at 4pm, so don’t go too late. We then walked to see Rodina Mat, the Patry Statue. We saw also saw ceased Russian military equipment from the Eastern front.

Then it was time for sauna ! We went to Pozniaki area and went for 2 hours : sweating, swimming in 10° degrees water along with a couple of beers, snacks and tea. We finished the evening by having dinner at Novaia Zemlia. The atmosphere is great with an inside river, a pool table. The food is great and prices are very affordable. For less than 5€ each we had 5 different traditional dishes to share. DAY 4 : we met in Arsenalna, the deepest metro station of the city and went to the caves in the Pechersk reserve, but on time ! We covered our heads as it is the tradition in the Orthodox religion. Then we took the bus 24 to Sofiiskaia Ploshad for Antoine and Vanessa to see, and when we went souvenirs shopping. We met the best seller who was very friendly. We bought typical and more circumstantial souvenirs for us to take back home.

Then, we took the funicular to go down to the Podolski area, along the Dniepr which is very nice and different from the center in terms of architecture. Then we had lunch in Puzata Hata and went to visit the Chernobyl museum. On the way there, we saw an outside exhibition of Eastern and Central European caricaturists. For your visit in the museum, I highly recommend the audioguides which take you through the exhibition in 2hrs and give you many information about this tragic nuclear disaster.

At night, Maïlys and I were invited for traditional dinner at some family’s friend house. We were once again able to appreciate the Ukrainian hospitality and cuisine. We had barbecue and many other homemade appetizers, and we tried Ukrainian champagne “Champanskoe” and Ukrainian vodka.

Prices : 25 UAH for Putin’s toilet paper, 400UAH for Dynamo Kiev shirt, 60UAH for key hangers, from 20 to 60 UAH for magnet / 100UAH for Chernobyl audioguide or 5UAH with ISIC card DAY 5 : time to leave already but we were able to have one last tour in the little markets, get our souvenirs and chill a bit at the beach, on the Solnichnie beach in Pozniaki area.

As you can see, the overall cost is pretty low compared to some European cities, and definitely worth a look.

I asked my co-travellers what they thought of their trip and an advice they would be to anyone going there, here’s what they said :

Maïlys, France : “I wanted to go to Ukraine because I heard positive feedbacks concerning the country. Touched by lot of historical events, I thought it was an opportunity to discover the place. I considered that it was a destination to make during my Erasmus in Poland as I won’t choose it for my future summer vacations (preference for exotic countries). What I like in Ukraine was the food, really rich. I have been surprised by the sympathy from Ukrainien people toward foreigners as it wasn’t really the same in Poland. I would advise people who want to go there to bring a Ukrainien dictionary : people don’t speak English !”

Benjamin, Chile : “My main reason to go was that I like soviet and post soviet culture, for me is really interesting (coming from a post capitalist dictatorship country) how culture and life changes in post communist countries, and the influence of this regime in the people nowadays.  The thing I liked the most was the exibition about the protests of the last year and the sovietic monuments.  What most surprised me was the amount of historical building it has, as its not a touristic city I thought it wasnt gonna have much old and beautiful building (like the churches) but I was wrong.  The best advice is to learn russian, and trying to talk with the people, most of them dont speak english but they have something to say and they will try to do it anyway, ukranians at first look intimidating but they are really happy to recive people from other parts of the world.”

Antoine, France :  “I wanted to discover a new country and I was interested to visit a country where influence of Russia is bigger. I also wanted to know how is life in this country regarding to the geopolitical situation. The people are so friendly, open minded and are curious about you. You can meet very interesting people at each corner. I was surprised by the cultural heritage of Ukraine. I thought it was much more communist style. I was wrong. Lviv and Kiev are two really beautiful cities.  Just go! Stop wondering buy your ticket and you will not regret it for sure.”

Vanessa, Spain : “The thing that motivated me to go to Ukraine was that I had the opportuny to go now that I am in Poland and it’s easier. What I liked the most were the churches because they were very different from the ones that we are used to see in other countries. I also liked the communist style of some buildings and the people who are very nice and helpful even if you do not speak the language. I was then pleasantly surprised by the people. The advice that I would give to someone planning to go there is to learn the basics in order to be able to communicate a bit”

So, as you can see, there are no reasons left for you not to visit !